There was a girl called Alexandrina who fell in love with a young prince.

This is the stuff of fairy tales but this one is true. When Alexandrina ascended to the British throne in 1837, she promoted her middle name and became Queen Victoria and he was Prince Albert. Despite the heavy duties and extreme pressures of state, Victoria remained deeply in love and devoted to Albert who stayed by her side until his untimely death. She remained in mourning until her own death, forty years later.

Many think of Victoria as a somewhat stiff and cool lady. She was very far from that. To her immediate family, she could be very warm and tactile and was strongly engaged in creating and marking memories for her family and close friends. Albert, too, loved to create events and mark them with mementoes, mostly for Victoria. Despite their regal exterior, they were both incurable romantics.

Victoria was the original exemplar of a working mum. Busy as she was with matters of state she had nine children. Clearly, family planning was not the issue of her day! Just imagine – she was pregnant for almost a third of the 21 years of her married life! Truly a very busy woman.

She was not a devotee of haute couture even though state occasions required her to appear so. Neither was she a lover of expensive jewellery although she did “blow the minds” of the Parisian courtiers in 1855 when she wore the famous Koh-i-nor diamond, which had been totally recut under Prince Albert’s supervision.

Victoria was given many pieces of jewellery in her lifetime but she treasured the pieces that had meaning rather than great value. She would have each meaningful piece engraved with the date of the significant event.

As each of her children was born, she had a twist of their baby hair made into an enamelled heart locket and mounted on to her gold bracelet. 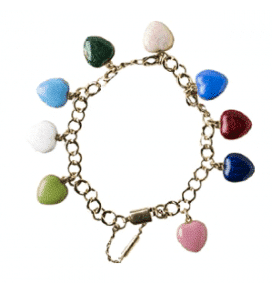 This still forms part of the Royal Collection.

This piece is of limited intrinsic value but was her most treasured piece of jewellery.

Jewellery to mark a person or event has been around for time immemorial. There are clear examples of such jewellery with Egyptian noble families from around 3,000 BC. However, in Britain, Queen Victoria made it fashionable as her courtiers and family copied her lead. This continued for more than a century, really, until the advent of popularly available photography when people switched to pictorial memorabilia.

Around the same time, in the 1860’s, American women were making jewellery from the hair of husbands and sons who were either departing for, or had been killed, in the American Civil War. After that war Ann Jarvis invented the concept of Mother’s Day in America to honour mothers who had lost sons in that war. Often a mother would be given a locket with a son’s hair in commemoration. See below: 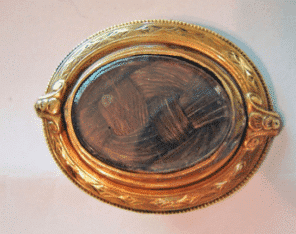 This momento mori (reminder of death) was also adopted by Queen Victoria. In fact Prince Albert had imported this concept from his Germanic homeland where it was common to use the teeth of the deceased in jewellery. 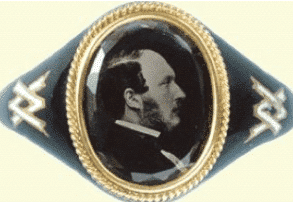 Victoria commissioned this mourning ring with a picture of Albert and wore it for most of the remainder of her life. 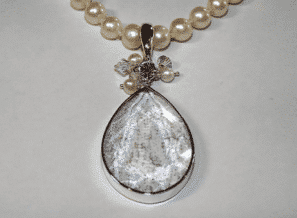 Now, in the 21st Century, there is a strong resurgence in the popularity of Remembrance and Memorial Jewellery. Many people have the hair of their children incorporated into a piece of jewellery. It has become popular to add the ashes or funereal soil to a treasured jewellery piece. Increasingly people, both men and women, are remembering their pets in a similar way.

I think that Alexandrina would be very amused!

Just like Queen Victoria did, we take great pride and respect in memorial jewellery. If you’d like to see a range of memorial jewellery, including ashes or hair imprinted pendants, rings to earrings, please browse through our website.